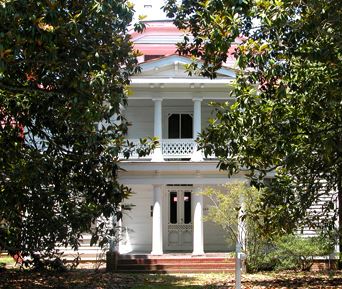 A name like Holly Springs conjures images of cool waters steadily trickling from resilient, deep aquifers, springs that run past vibrant, age-old holly trees that have withstood storms and droughts, wars and depressions, and times of peace and prosperity.

Indeed, this southern Wake Town originated at such a place, where 40-foot holly trees towered over freshwater springs. Some of the local centuries-old springs feed creeks and ponds to this day.

In colonial times, a small cluster of homes and businesses formed around the original “holly springs” in an area that once was a Tuscarora Indian hunting ground.

The tiny community included a sawmill, cotton gin, a store and a house that was used as a school and as a church, one of the first four to join the Raleigh Baptist Association in 1805. The location of this settlement is believed to have been near the intersection of Avent Ferry Road and Cass Holt Road, roughly across the street from Holly Springs High School.

The holly springs church disbanded when “several members became indulged in things of this world and became unfaithful to the church,” according to a church history. Some former members established another Baptist church a couple miles north at the intersection of two roads, one that went from Hillsborough to Smithfield and the other from Raleigh to the Cape Fear River and then on to Fayetteville. The crossroads was to become what is now downtown Holly Springs.

It was at this crossroads that Scottish settler Archibald Leslie opened a tailoring business and store and began construction on a 180-acre estate that also contained freshwater springs. Today, all that remains is the main house, listed on the National Register of Historic Places as the Leslie-Alford-Mims House, and the springs that supplied the home with water, accessible to the public by a short, winding dirt trail that winds through the woods and past a family cemetery. The house is a commanding landmark, visible from Main Street in the heart of downtown Holly Springs. It is the most noted historic landmark in Town, having weathered nearly two centuries and a two-week occupation by Union troops during the Civil War and having served as the home of George Benton Alford, founder of the Town of Holly Springs. While the springs on the property are not the namesake springs of the Town of Holly Springs, they are historic in that they supplied the founder’s home with water and were used in his business ventures on the property.

Next: The Civil War in Holly Springs or
Read the Complete History in this Booklet Published in 2002