In celebration of Black History Month, the Town of Holly Springs is highlighting a few of the people and places instrumental in the history of our town.

Much of the information is based on historical notes, newspaper and magazine articles, and verbal recollections. This webpage is not intended to represent the complete, definitive history of Black leaders in Holly Springs. We are thankful for the many leaders – those mentioned on this page and those not mentioned – who have had a deep, positive influence on our community.

The town continues to research and collect Holly Springs history. Do you have stories or photographs you would like to share? Staff would like to record your information for possible future use in building a more comprehensive history of Holly Springs. Please email communications@hollyspringsnc.us or call (919) 557-2936.

The Town's mobile, interactive Black History Tour gives users a glimpse into the rich history of Holly Springs. Use your phone to navigate as you walk downtown and see historical photos and hear residents' recollections. For the navigation features on a phone, use the Google app or any web browser other than Safari. Rather than walk it, you also can also scroll through the tour on your computer 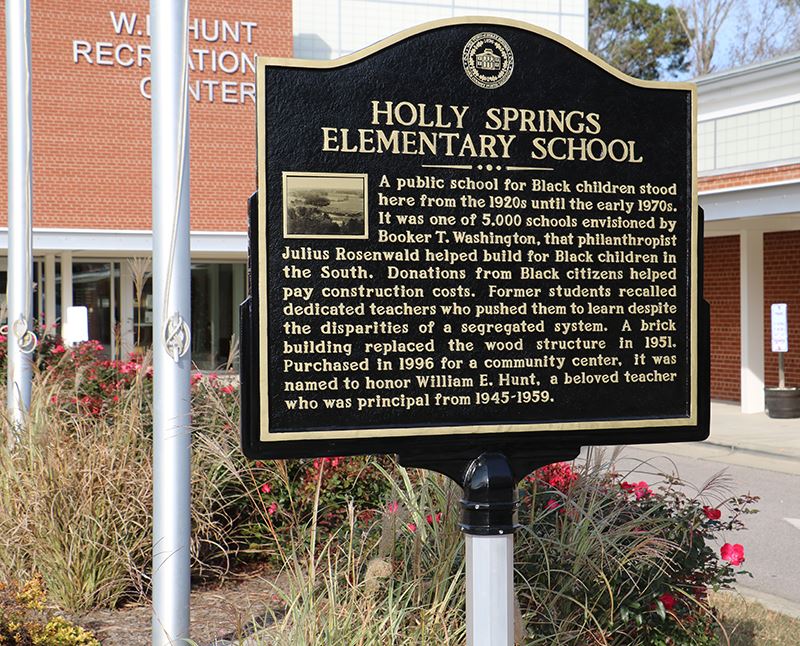 The original plank structure was built around 1924 with donations from Black citizens, county school funds, and a grant from the Rosenwald Foundation. Classrooms were heated with coal burning stoves. The school lacked indoor plumbing.

Despite the disparities of a segregated system, former students recall dedicated teachers who pushed them to do their best and reach their potential. For Holly Springs’ Black residents, the school was a source of community pride.

The original plank structure was replaced by a brick classroom building in the early 1950s.

See a video about the former school. 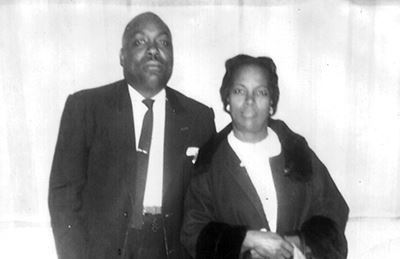 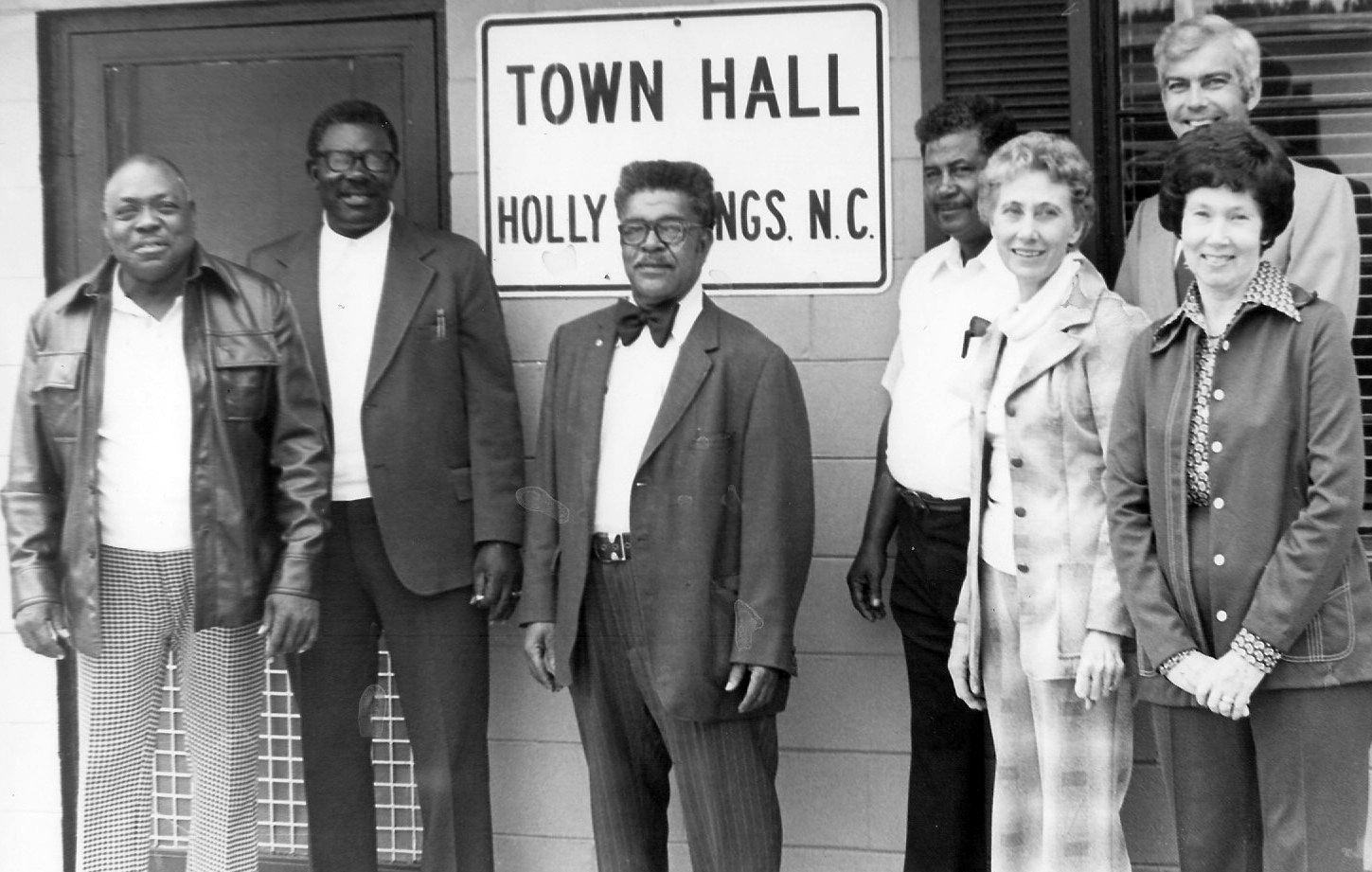 Lassiter and Norris were elected as the Town’s first Black commissioners during the 1970s. Norris became the first Black mayor of Holly Springs when he resigned as commissioner in 1980 to fill the vacated mayoral seat. Pictured, above left, are William Bernice and Cora Mae (Norris) Lassiter, who was appointed to the town council in 1981 to fill a vacated seat. Pictured, below left, is James Norris (second from the left in the image).

Womble served nearly three decades as a Holly Springs town board member and for a year as mayor.

Holly Springs was a community of a few hundred residents when Womble joined the town Board of Commissioners in 1981. He served for the next 20 years. In January 2001, the board appointed him as mayor when Gerald Holleman resigned. Womble lost the mayoral election that November but returned as a board member two years afterward and served until 2011.

By 1997, Holly Springs was beginning to build a town parks system, almost from scratch. What is now Hunt Recreation Center was then a former school building serving as a Town Hall annex. Across from the Hunt Center were tobacco fields that appeared slated for subdivision expansion. Womble advocated for buying the 46-acre tract for park land instead. What today is Parrish Womble Park has ball fields, tennis courts, synthetic turf soccer and lacrosse fields, a volleyball court, picnic shelter, and more.

In his professional life, Womble served with the Wake County Sheriff’s Department. He retired with the rank of major in November 1997. 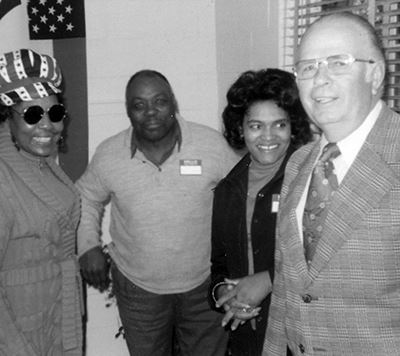 Womble was the first Black female to be elected to serve on the Holly Springs Board of Commissioners. She served from 1975-1977. This photograph shows Womble (second from right) at a reception for candidates running for office. Also pictured are Elizabeth Cofield, Bernice Lassiter and Vasser Sherrill. 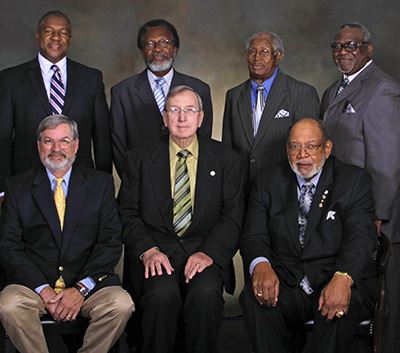 In addition to serving on the Holly Springs Board of Commissioners, Byrd was a Board of Adjustment member. He pastored the First Baptist Church of Holly Springs for more than 24 years and also has served as assistant precinct judge during elections. In the photograph, he is at the far right in the back row. 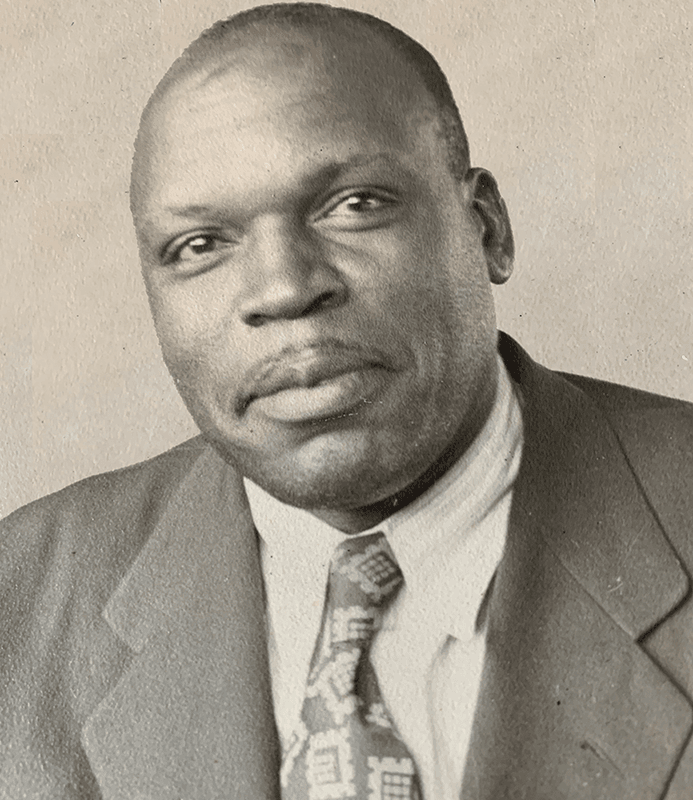 Hunt was a teacher and principal at a school for Black children that stood on the site of the Town recreation center that bears his name. Holly Springs Elementary School opened around 1924. The original plank structure was a Rosenwald School.

Hunt was named principal in 1945 and served for 14 years in the plank structure and in the brick classroom building that replaced it in the 1950s.

Hunt was beloved and respected for his commitment to students and to the community. For a time, he rented a room nearby during the week and commuted home to Raleigh on weekends.

Hunt demanded much of his students and held them to high standards. He established the first Boy Scout troop in Holly Springs and started the 4-H Club, according to newspaper accounts.

After the Town purchased the former school for use as a community center in the mid-1990s, community members asked Town leaders to name the center for the beloved former principal and community leader. 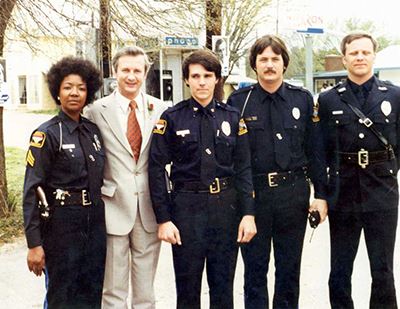 “Womble beat out 25 other applicants for the position, making her the only Black and full-time employee of the small town (approx. 969) and the highest paid at $10,000 yearly.

“‘It feels wonderful, just great,’ says Womble, even though the job is pressure-packed. ‘I really wanted the job and I was qualified.’” 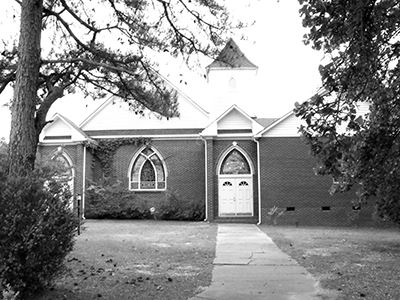 Following the Civil War, about 50 freed men pooled their money to buy land for a church where First Baptist Church stands today on Grigsby Avenue. The Black men and women who helped build the town before the Civil War stayed and kept the town alive after emancipation.

The half-acre plot of land purchased for the church held a log cabin. A new church building was constructed in the late 1860s and replaced after it burned in a fire. The building then was renovated in 1935 and again in 1952 with added brick veneer and modern amenities.